I’ll always remember the first time someone explained how the moon affects the tides in a way I understood. To an astrology-obsessed thirteen-year-old it was a light bulb moment and all the confirmation I needed that the magic feeling I got when I gazed at the sky had its origins in something real.

Our indoor lifestyles make it easy to miss the phases of the moon, especially in winter, but I know we’ve all felt its power. Who hasn’t basked in the glow of a full moon while wandering back from a great night out? Or watched it rise like magic  over a festival stage? Or sat awe-struck on a balmy summer evening beneath a perfect crescent and a sky full of stars? No one needs me to explain the otherworldly wonder of any of any of the above.

Earthlings have been trying to get to grips with the mysteries of the moon for millennia. The ancient Greeks mythologised it, Galileo uncovered its craters, great artists painted it, storybook wolves howl at it and NASA put a man on it. And while Elon Musk’s SpaceX plan to put tourists in orbit later this year has been put on hold temporarily, it’s only a matter of time before aspirational weekend breaks require flight suits.

But what about the more spiritual side of the moon and its phases as it orbits the earth? I can’t remember a time when I wasn’t fascinated by the wax and wane of the moon and if you ever want to know when the next full moon is due I’m definitely your girl… but I’d never gone as far as doing a proper new or full moon ritual until I started this project. In fact, there’s a whole post to come on the brilliant Moon Club new moon ritual I did with Alexandra Roxo, connecting with others across the globe using that other purveyor of magic, the internet. But while I polish that post up for public consumption here’s a run down of the phases of the moon and some tips on how you can harness its power to set intentions, release what no longer serves you and generally kick ass down here in the earthly realm. 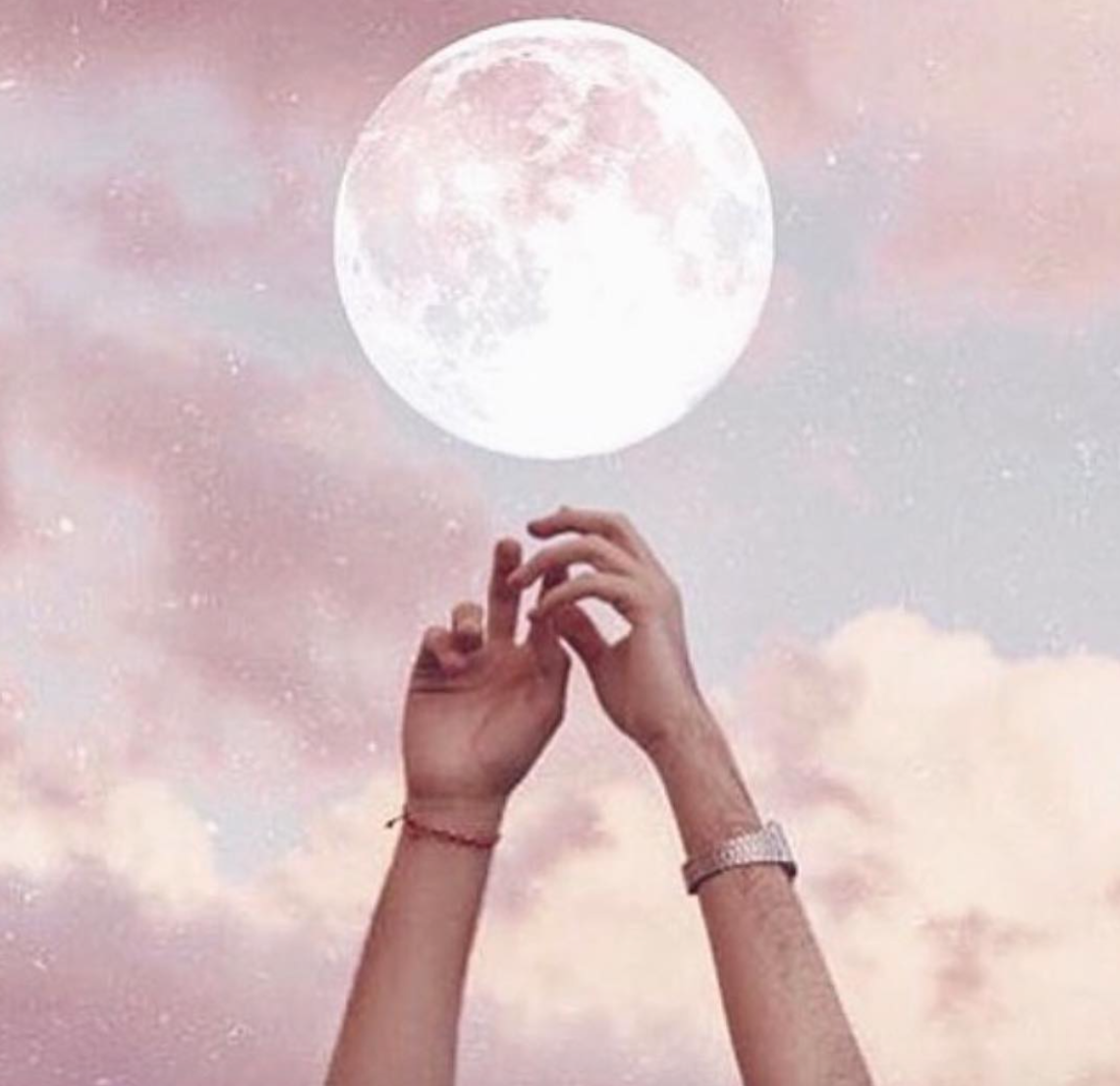 NEW MOON
What is it? Otherwise known as the dark moon, this is the beginning of the moon’s new cycle. The alignment of the earth, sun and moon leaves the side that faces us in darkness so it’s not visible.
What does it mean? Think of this as a fresh start, a clean slate or a blank page. This is thought to be the best time to set intentions, define goals and manifest the life you want. If there’s something you want to invite in to your life, now is the time to make that clear to the universe. And if there’s anything you think you might need to let go of in order to make that happen (be honest with yourself) then it can be a good time to release that too.
How do I harness its power? There’s no right or wrong way to harness the power of the new moon. You might want to join a new moon ritual online or in person or simply take some time out to look within, meditate or free-write your ideas on what you want to bring forth in this new cycle. A home ritual can be as simple as lighting a candle, writing down your intentions on the night of the new moon and either speaking them aloud or burning them into the ether.

WAXING MOON
What is it? The phase that falls between the new and full moon sees the moon’s illumination grow gradually. Look to the skies a few days after the new moon and you’ll see a slim crescent moon which brightens further to reveal a first quarter moon (seven days after the new moon) and later a waxing gibbous moon a few days before the full moon (14 days post new moon).
What does it mean?The waxing stage of the moon cycle is said to be a time of high energy and power. Now is the time to focus and really work on your goals, embrace progress and if the mood takes you, try something new.
How do I harness its power? Keep checking in with yourself and your goals during this part of the moon cycle. Now is the best time to make things happen and be productive so stay focused, repeat your intentions to yourself and don’t shy away from taking steps towards whatever your heart desires. Relight that new moon candle if you feel called to, read tarot or oracle cards or refocus your energy with a ritual bath.

FULL MOON
What is it? Bright, bold and lighting up the sky, this is the big one. The full moon occurs 14 days after the new moon.
What does it mean? There’s so much folklore around the full moon that even the most scathing moon power cynics tend to be willing to acknowledge its ability to change a vibe and make life feel that bit more intense. The power of the full moon makes it the ideal focus point to reflect on how you’ve grown and what you’ve achieved since the new moon a fortnight ago. If you want to cast a few spells or manifest some magic, now is the time, too. Think of it as the final powerful fling of the waxing growth phase but because it also spells the beginning of the waning ‘release’ phase, this is also the time to be honest about what you need to let go of. The full moon is the perfect time to wave goodbye to bad vibes and negativity.
How do I harness its power? All you really have to do to make the most of the full moon is get outside and bathe in it. Or at least open your bedroom curtains a bit to let its light shine in. For crystal lovers now is the time to charge up your favourite stones and if you’re feeling the need to manifest then making a full moon vision board is a great way to refocus your mind and ask the universe to get on with fixing you up with that new career/house/lover. To use its power to help you let go of anything that’s holding you back try lighting a candle and writing a list of things you wish to wave goodbye to before watching them burn. Invite the positive in in their place. The full moon is every bit as magical as it feels… embrace it.

WANING MOON
What is it? In this phase the moon’s illumination begins to reduce, just a little at first to a waning gibbous moon, then to its last quarter (seven days after the full moon) and finally right before the cycle begins again to a slither of waning crescent.
What does it mean? The waning moon is said to be the best time to take stock, look within and be honest about what really matters to us. A time of release and relief in preparation for the next cycle. So round up those negative thoughts, limiting beliefs and that voice in your head that tells you you’re wasting your time… and send them all packing.
How do I harness its power? Allow yourself the space and time to take stock. Now is a great time for meditation, visualization and saying no to anything that doesn’t light you up. Become at one with your sofa, restore your energy and be really honest with yourself because in just a few short days the new moon will come back round and you’ll have work to do again.

*Every phase of the moon is also impacted by the astrological sign it falls in which can increase its power in specific areas. More to come on all of this… 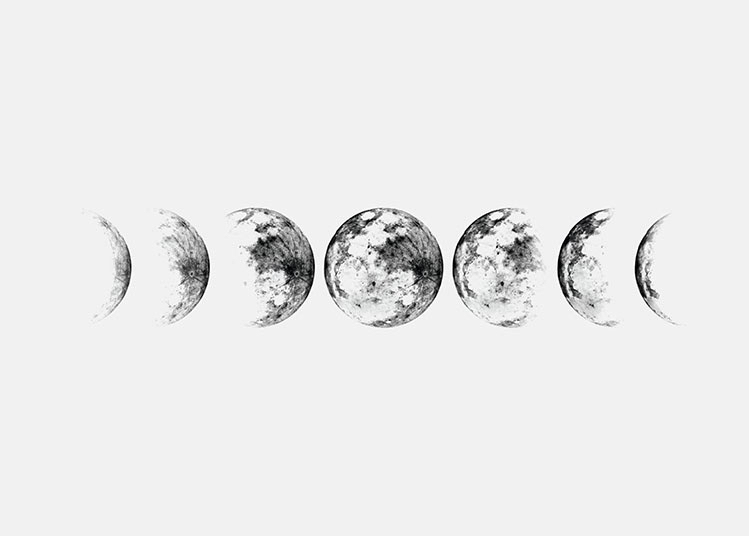 MYSTICAL THINKING
If you’re in, you’re in. As you’ve seen above, you don’t need anything more than a moon calendar and good intentions to make the most of the moon’s magic. Go crazy with smudge sticks, oracle cards and rituals if you feel moved to but even just paying attention to your thoughts, feelings and state of mind at each phase can have a massive impact on your wellbeing, productivity and self belief.

SPIRITUAL CYNICS
You don’t have to be fully on board with the idea of moon power to have something to gain from acknowledging its phases. We know we can all benefit from taking time out to reflect and look within. Likewise, it’s common knowledge that goals are best achieved by breaking them down into smaller tasks or intentions. So even if the idea of idolizing a lump of rock is a stretch too far for you, the phases above could still provide a useful framework for staying focused and recognising the natural ebb and flow of life. 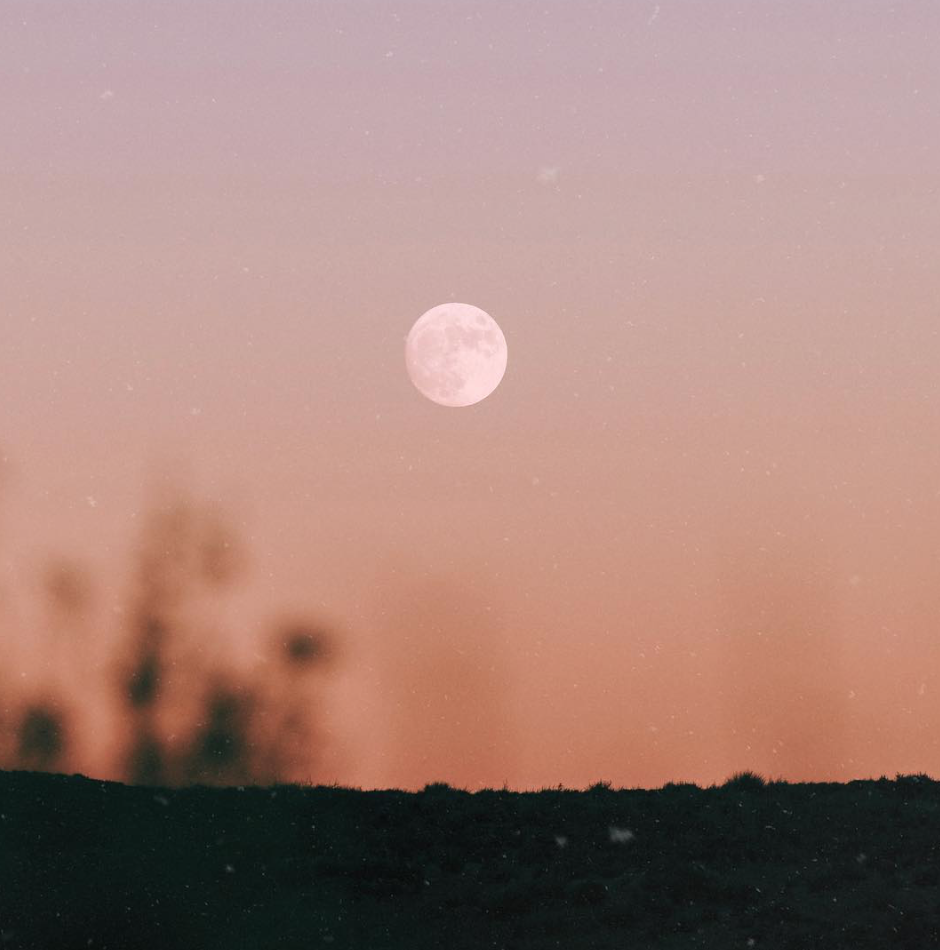 MOONS BY MONTH
I love that folklore gives the full moon a name specific to the month it falls in. These are different in the northern and southern hemisphere and vary by year, nation, culture and traditional but below are some of my favourites.

☮️✌️☮️ . . . #ayearofmysticalthinking #mysticalthinking #teachpeace
AQUARIUS SEASON ♒️ Forget #bluemonday and tune in to some free-spirited, forward-thinking, independent, rebellious, change-the-world humanitarian air sign vibes✌️ . . . #ayearofmysticalthinking #mysticalthinking #aquariusseason #bemoreaquarius #aquarius #ageofaquarius #virginsuicides #airsign #luxlisbon
TRUTH And you’ve got to watch those thoughts too right @theyogahousetwells ✨ Still on a high after a brilliant #sankalpa (basically a yogic intention for the year) workshop at #theyogahousetwells yesterday 🧘‍♀️ And back there today to run a meditation session for a fabulous group of supporters of social enterprise/local venue @freckles.on.the.inside 💫 All the good vibes... . . . 📸 @subliming.jpg via @__wolfsister #mysticalthinking #ayearofmysticalthinking #hafiz #hafez #intentionsetting
NEW MOON MAGIC 🌑 Just a week to go until the first new moon of 2020 and lunar new year! ✨ If you haven’t got round to setting intentions for the new decade yet this is a potent time to tune in and get the universe on board with your plans ✨ If you fancy doing that in great company at a beautiful studio (swipe for pics) with a relaxing crystal sound bath... why not join @alicerose.space and I at @spn.fit next Sunday (26 January; 4.30-6.30pm) where we’ll be doing exactly that 💕 Think heavenly aromas, crystal grids, a super relaxing new moon meditation, oracle card insights and the magical sound of Alice’s alchemy crystal bowls ✨ The ultimate 2020 refresh session! Can’t wait! You can book a spot on SPN’s website (I’ve put a link in my profile too). And feel free to DM if you have any questions! . . . #spnft #spnfttw #meditationtunbridgewells #moonritual #newmoonritual #intentionsetting #whatsontunbridgewells #whatsonkent #whatsoneastsussex #crystalbowls #newmooninaquarius #alchemybowls #crystalsoundbath #crystalsoundbathtunbridgewells #mysticalthinking #ayearofmysticalthinking #alicerosespace
THURSDAY ✨ Yoga, horoscopes then restoring order to the chaos that has become my house 👊 . . . 📸 unknown via @wildponysocial #ayearofmysticalthinking #mysticalthinking #astrologersofinstagram #horoscopewritersofinstagran #yoga #peace #peacesign #peacelove #innerpeace
2020 VISION ✨ Oh how I love watching a vision board come together. Great morning cutting, sticking, card reading, meditating and magic making at ace new venue The Inside @freckles.on.the.inside 💕 Love how everyone’s board was so different, so telling and so uniquely them ✨Thanks so much to everyone who came! First of many mystical happenings in Calverley Grounds I hope! 🔮 More of what we got up to on my Stories if you fancy a look. . . . #ayearofmysticalthinking #mysticalthinking #visionboards #2020vision #visionboardworkshop #theinsidetunbridgewells #theinside
%d bloggers like this: